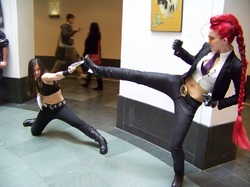 Last year was my first time attending Anime Boston and I made no secret of the fact that I really enjoyed myself. In fact, as soon as I got home I was making plans to return again for the 2012 convention. Return I did, though this time as a Press representative of Jolt Photography. Leading up to Anime Boston we had a bit of a strange experience concerning our Press status. We were approved by the convention and sent a confirmation e-mail, but a few months later received another e-mail that we were not approved. After showing the original confirmation in response to the second e-mail, we were re-approved as press but the experience made me somewhat nervous of what to expect at the convention.

My party arrived at the Boston Copley Place Marriott around 5:30 am after driving through the night. The man who checked us in was pretty much the greatest person ever and the hero of the weekend. In fact, almost every Marriott staff member we interacted with was friendly and helpful. There is one quirk: the elevators at the Marriott are interesting. They all go to the first five floors, but then there is a set that goes to the 6th through 27th floors, and another set that hits the 28th through 38th. Our room was on the 36th floor but we had friends staying on lower floors and visiting them always involved four elevator trips to get to and from. Early in the morning this wasn’t really an issue, but later in the day with having to wait for elevators being more common, it could be somewhat annoying.

By the time we made it down to get to our badges, the lines at registration had died down. The information booth directed us to a customer service booth to get our Press badges and we received them without a problem, though we were later walked back by a staff member when someone realized the person who gave me my badge had forgotten to put a validation sticker on it. Overall, my experience was fine in spite of the forgotten sticker; when I talked to friends about their registration experience however, I heard mixed things. From what I gathered, the pre-registration line went fairly quickly, but the at-door line was slow. I was also told that there were some negative interactions with staff members/volunteers who seemed to have already lost all patience on the first day, in the first hours. A friend of mine put it best by saying “You can’t expect the 93rd person to have heard you the first time.”

As far as I could tell, not much about the set-up of the convention seemed to have changed from last year. Registration was in the Sheraton hotel, while the Hynes center held the Dealer’s Room on the first floor, the main events stage on the second, and the Artist’s Alley on the third. It was very cold and windy this year so the fact that everything (including the Marriott) is connected by a shopping mall was a godsend. We only ventured outside once for a photo shoot; everything else we needed from food to an emergency tooth brush could be found without having to go out and brave the weather.

One thing I love about this con is how spacious the Dealer’s Room and Artist’s Alley are. Though on Saturday the Artist’s Alley still got rather crowded, the walking areas in both spaces are wide and fairly open. Both spaces are also fairly well lit, though the Artist’s Alley has a more yellowy lighting than the fluorescent white of the Dealer’s Room. There was a wide variety of art and talent to be admired in the Alley; I wished more than once that I had more room to hang things so I could buy prints. Alas, my wall space is limited, so I could mostly only view and enjoy. The Dealer’s Room also had a nice variety of stuff, though the major plus for me was that there were several different booths to buy wigs. I’m always a fan of being able to wig shop at cons because I like being able to see what I’m getting in person; the Dealer’s room had four, possibly even five booths that were selling different wigs. I found a few neat things from some of my favorite older animes too, like a Tenchi Muyo! mug and a Blood+ necklace.

On Friday night I attempted to check out the convention Swap Meet, housed in a room on the third floor of the Hynes. I had a few doubles of manga and comics that I received as gifts that I thought I might be able to trade for new things. Unfortunately I couldn’t even stay in the room to try and look around. It was jam packed, hot, and permeated with an unpleasant smell that I believe is the “con funk” I’ve heard so much about but somehow managed to avoid. The thing is this is a problem that could possibly be fixed if a more open space could be allotted. I don’t know what is available, but I was definitely interested in the swap meet, I just could not stay in that space. After leaving the Swap Meet I dragged my friends to the Intro to Japanese Fairytales panel. With the reinventing of fairytales currently being in vogue, I was interested as a writer to hear some non-western stories. Unfortunately, the first thing the person leading the panel announced was that he would actually be talking about Japanese history and story context, not the stories themselves. I was pretty immediately disappointed and after ten minutes told my friends we didn’t have to stay—it wasn’t the panel I wanted to see. Though both the Swap Meet and the Fairytale panel were a bust, finding ourselves on the far end of the Hynes did offer one opportunity: we found a nice staircase to take pictures of our cosplays on the following day.

The cosplay at this year’s convention was amazing. I saw tons of wonderful costumes and lots of creativity. I also found even more excellent locations to stage photo shoots. I only wish it hadn’t been so cold so I could have taken more pictures outside. I mentioned last year that this is a great con for the cosplayer and photographer and I stand by that claim. There’s really a little bit of everything if you look around

Saturday night was the convention’s Masquerade. I learned this year that apparently the Masque is one of the biggest things at Anime Boston. They give out tickets to get in and people start lining up hours in advance. With Press badges, we were able to get in ahead of the line, but we picked seats on an end near the exit because we had been warned that the event might be four hours long. While I enjoy masquerades, that is a lot of masquerade for me; I wanted to be able to exit quietly if my attention waned. The event hall was huge and I was surprised to see it even has a balcony! It was an impressive space. We ended up staying for the first hour and a half or so—enough to see the first thirteen acts plus the hall cosplay parade, as well as the amusing preshow projected onto the giant screens around the stage. The pre-show reminded me a lot of “Dragon*Con TV” and got the audience warmed up, excited, and laughing. The MC of the masquerade was called “The World’s Most Interesting Roadie” or just “Roadie”. He was kind of amusing, but it seemed like there were a lot of in-jokes from past masquerades that did nothing for me, not to mention every time someone in the audience yelled out he responded to them, thus drawing things out rather than keeping things moving. His mantra for the night was to make the masquerade “better than bacon”. I got tired of hearing it after an hour, I can’t imagine four. The masquerade started with a parade of hall cosplay entries, but they did not introduce anyone or say what they were cosplaying, a curious thing considering for the skits they named every single person involved from leads to stage ninjas, and listed what they cosplayed. The quality of skits that we saw varied. Some were clever and funny, some were great ideas with poor execution; there was some great dancing, but there were also some acts that left us scratching our heads. I feel that maybe there should be tighter screening on the masquerade. It is a very big event, and I wonder if the staff does pick and choose skits or if they accept everyone who enters. This masquerade had over thirty acts; this could just be my personal preference but I feel like this is a case of less is more. Cap the number of acts and really pick the best ones; four hours is just too long.

Sunday of the convention was Easter Sunday again. I find it unusual that they continually schedule Anime Boston to be on Easter weekend. I suppose that is when the Hynes is available though, and the staff has to work with what they can. The neat thing about the con being on a holiday is the holiday cosplay: I spotted lots of bunny ears added to make costumes festive, and though it’s just a little thing, the Easter cosplays make me smile.

All-in-all I had fun at Anime Boston even when there were snags. I love the location and got to spend time with friends I don’t see often, I saw fantastic cosplays, had fun, unique photo shoots, and I got to experience some new things this year (including Cheeseboy’s… if you like grilled cheese, GO.)  It was a relaxed con for me and made for a nice vacation. I hope that I can make it back in the future! 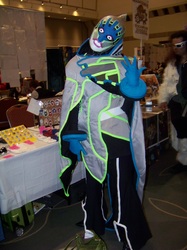 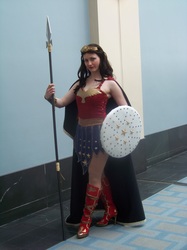 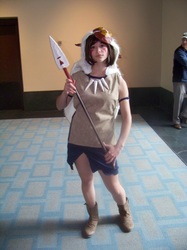 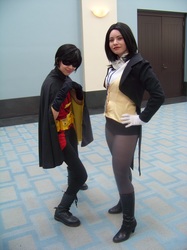 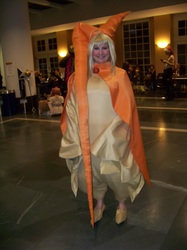 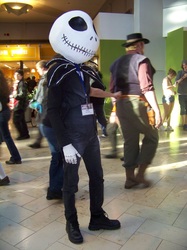 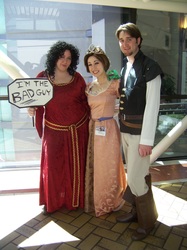 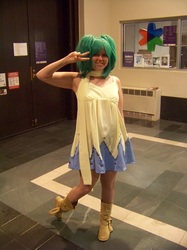 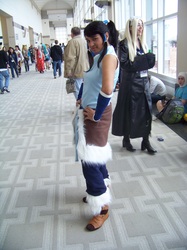 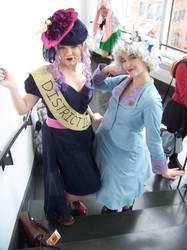 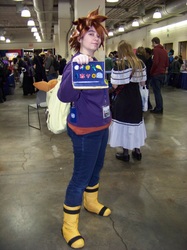