Hermione Granger (Harry Potter and the Prisoner of Azkaban) 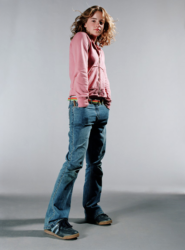 It's Hermione! Harry Potter and the Prisoner of Azkaban is my favorite book. Ever. And the movie is one of my favorite movies ever. I wanted more than one cosplay for my first Harry Potter convention, LeakyCon 2009, so I decided I'd put this together! The hoodie comes from H&M, I got a rainbow belt from eBay (though my hoodie tends to cover that detail), and my Gola sneakers came from zappos. Word to the wise; when these shoes are broken in they are amazing. I did not break them in before LeakyCon and did some serious damage to my poor feet. ;_; I actually have a Time Turner from The Noble Collection, but I don't wear it much because the center tends to pop out. I bought a plastic one at LeakyCon, so I'd have one I wouldn't have to worry about, but it is currently missing. :(

In January of 2011 I visited The Wizarding World of Harry Potter and decided to wear this around because it would be like secret cosplay and I am a nerd. I got a picture of me as Hermione in front of Hagrid's hut though! :D So worth the belt getting me stuck at airport security because the latch caught and it wouldn't come off. XD Also had a magical moment in June 2011 while visiting the Harry Potter Exhibit in NYC: it was windy so I wore the pink hoodie and got a huge surprise when I turned a corner in the exhibit and found myself face to costume with the real thing from the movie. :D 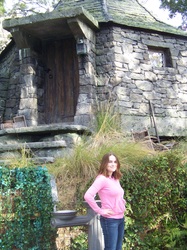 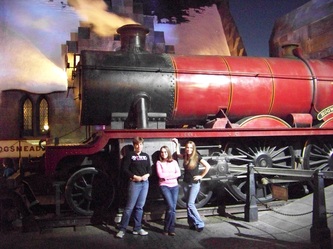