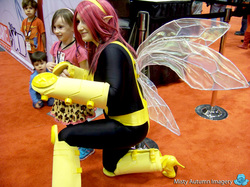 This year, for the first time, I decided to go visit Jessica Jolt in her natural habitat of Chicago. Given our New York Comic Con tradition, it seemed only right that I should come check out her home ReedPOP event: C2E2. This convention surprised me in some ways; I went in with some expectations based on New York Comic Con, but found its Windy City counterpart to be a much more relaxed venture.

I bought my badge early with a special $10 discount from having attended New York Comic Con in 2012. It was conveniently mailed to me, just like NYCC badges are, so I didn't have to wait in line to get it upon arrival. I don't actually know if badges sold out for this event or not. While I stayed at a friend's local apartment, Jess was staying in the convention center attached Hyatt hotel, so I saw quite a bit. The room was fairly standard, but nice. Not super spacious, but not cramped either. There was a nice (if somewhat pricey) area to get a pretty wide selection of food in the lobby area, plus quite a bit of seating. We never had any issues with the elevators, either; the most we waited was maybe three minutes. Whether in the convention center or the Hyatt though, have money for parking. The prices seemed fairly standard for city parking near an event center/in a hotel, but that is not cheap, and there is little to no free parking in the immediate area. Parking in general was kind of tough from what I experienced. On Saturday it took us about a half hour to find a place, because the McCormick’s Lot A (the only one we could find as we circled) was closed off; as was the nearest garage we passed as we searched. The lot manager at the McCormick did let us in when he spotted us circling again to try and find something, because a few spots had freed up.  McCormick Place itself, as I found out, is huge, with C2E2 housed in just one of several connected buildings.

Upon our arrival on Friday, we were given badge lanyards as well as reusable shopping bags and Men in Black sunglasses. It was kind of exciting to start with con swag even though we weren’t there at the day’s opening.  Outside of the show floor there were signs touting the guests present and a DJ playing music, plus the panel rooms if one went up another floor. Everything else but the IGN Theater was housed inside the show floor; Exhibitors, Artist Alley, Autographs, and even the food court. To get inside, you had to have a bag check and a badge check, but both were quick and the people at the entrance actually always seemed pretty friendly.

Me being a huge Pirates of the Caribbean fan, I made a b-line for the autographs area to get a poster I had brought with me signed. Martin Klebba (Marty), David Bailie (Cotton), and Kevin McNally (Gibbs) were all present, while the other three guests had left their booths temporarily. There was no wait and all three actors were very kind and seemed happy to chat. All weekend I actually really only saw long lines for a few of the convention guests. Things generally seemed pretty mellow over in Autographs, and sometimes one could even spot the guests wandering around and checking things out. Throughout the day, I stopped back to see if the three Pirates actors I had missed had returned—by the end of the day I’d managed to catch Lauren Maher (Scarlett), and Lee Arenberg (Pintel), and I got Vanessa Branch (Giselle) on Saturday. These three were also incredibly kind as well, but I’d like to give special props to Lee Arenberg who actually talked to Jess and me for fifteen or twenty minutes and could not have been any warmer. He made meeting him something really special.

We spent the rest of Friday exploring the show room. I was surprised to see that while Marvel and Dark Horse were represented, DC Comics did not have a booth. While there were a lot of booths in the Show Room, it wasn’t overwhelming like NYCC can be, and there were not many large exhibitors. There was lots of room to move around because there wasn’t really a crowd, which was an unexpected relief. Given the number of booths selling comics, as one would expect at a comic convention, I spent a little while looking for a certain variant cover of a Runaways book, but most of the booths’ comic boxes were so stuffed you couldn’t even rifle through to look at covers. They were also mostly not in any sort of order. Given that, I would give this note to dealers: I can’t buy things if I can’t find them.

On Saturday, I started the day with some photo shoots. If you look, you can find places to have them, but you may have to be creative. The setting is definitely very modern and urban, but the grassy area in front of the Hyatt came in handy for me a few times over the weekend, especially with the little stone pillars I could stand on and look down from. Heading into the show room, it was more crowded than Friday, but still pretty manageable. Around 2:30, we arrived to line up for the I have no sewing machine, but I must Cosplay! panel, only to find it was in a very small room. They actually closed the doors just as we stepped up, but they let Jess and me go in and stand just before the panel started at 2:45. Throughout the entirety of the panel people were still coming in when others left, down to the last 15 minutes. As for the panel, there were some nice tips for resources, but as someone who has been a non-sewing cosplayer for several years, there wasn’t a lot of straight-up new information for me. It was nice, however, to see the encouragement given to people who just want to dress up for the love of characters, even if they can’t sew themselves whether that be for lack of skill, time, or some other reason.

After the panel, Jess and I headed to the food court. It was pretty busy in comparison to Friday when we found a seat easily, but we were able to get a spot at a table with a little patience. On Friday, I’d bought myself nacho chips with cheese, which were pretty standard. Jess ordered hers with beef and toppings, but the meat was so greasy it quickly soaked the cardboard and leaked through to make a small puddle on the table. As this was not particularly appetizing, Jess ended up tossing her soggy snack and shared mine. On Saturday, I got a cheeseburger and chips. Again, pretty standard. It tasted fine and wasn’t messy. For a combo of burger, chips, and soda it was around $10, but again, in a city convention center that’s pretty normal. Jess got a gyro and it didn’t create a puddle on the table, so it was already several steps ahead of her previous day’s food. She seemed to think it was decent.

After food, we wandered the Artist Alley. There were so many incredible artists, plus a stage in the center with a screen set up to so what a featured artist was working on. I’ve never seen this done before, but it was fun to look up and see if we recognized characters whenever we passed by.

On Sunday morning I arrived around 10:30 AM and ran straight for room W471 and the The Cursed Black Pearl Crew panel. I was afraid the room would be the same size as the one from Saturday’s cosplay panel (they all seem the same from the outside) but it was actually bigger and by the time the panel started there were still quite a few empty seats to the far sides and the back. The panel was apparently being broadcast over the internet—there was a small crew in the back working a camera and what looked like a sound board— but it was a real treat being there in person. The moderator had an easy time of it because the actors were incredibly engaging and funny and definitely kept things rolling with their stories, memories, and thoughts. While the convention website had only mentioned the four men being on the panel, both women also attended and completed the line-up. The last 15 or so minutes were spent taking questions from the audience which the actors fielded gracefully and knowledgeably. It was overall a really excellent panel.

My friends and I wrapped up our Sunday with a few more photo shoots and a return to the Show Room. Like NYCC, Sunday is Kids Day at C2E2, so there were adorable kids in costume everywhere.  Sometime in the last few hours, Dark Horse also made everything at their booth 50% off and four single comic issues for $1. I picked up the Serenity hardcovers and a few other things- definitely a great deal. Marvel was also hosting a giveaway, but like NYCC it was basically a mob scene and I couldn’t get close to the stage. It was nice though, that they had someone walking along the outer edge of the crowd handing out posters (alas it was one I had already from NYCC).  When 5:00 PM hit, they actually cleared everyone out of the show floor room pretty quickly to get the notorious red carpet all rolled up and stowed away until next year.

I had a really great time at C2E2. I hung out with great friends, met wonderful new people, saw some amazing artists, and actors I have long been a fan of. Given my experiences with NYCC and crowds, I was also pleasantly surprised to find C2E2 busy but never overwhelmingly so. I never found myself becoming claustrophobic in a gridlock of people and there was always room to move even if a little maneuvering was required. As it stands, I’m not sure when or if I will make it back, but if I lived in the Chicago area, it would be a can’t miss convention for me. I loved it. 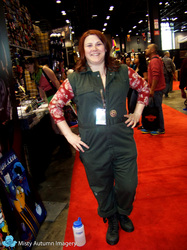 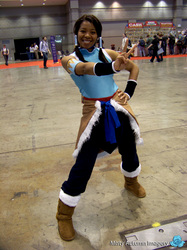 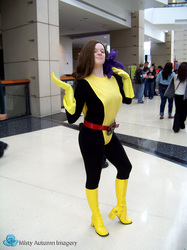 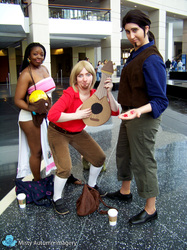 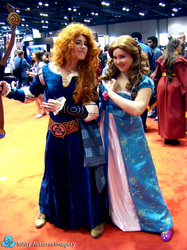 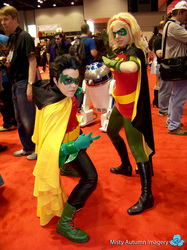 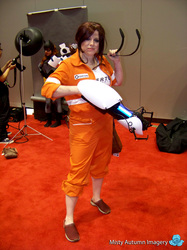 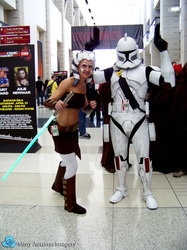 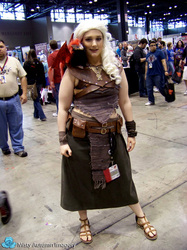 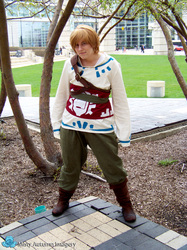 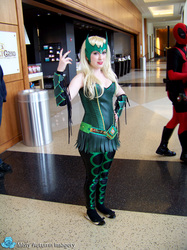 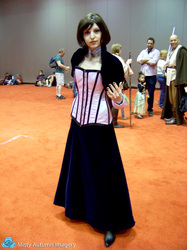