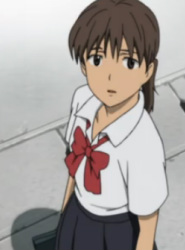 So Chibi Inu Tsuzuki introduced me to this awesome anime and manga called Blood+ and I pretty much fell in love with it. She was going to be dressing as the main character, Saya, for Anime Boston 2011, and I was all excited about the series, so I threw this together the day before leaving for Boston so I could represent with her: Kaori, Saya's best friend from school in the anime. She's a sweetheart and a little ray of sunshine. ^_^

I had the skirt from my Luna Lovegood costume, the shoes in my closet, and I used the hair bow for my Sailor Venus costume, after attaching it to some red ribbon. The only thing I had to buy was the white shirt (which took searching eight different stores because that is my luck when I look for simple clothing items. XD ) and clip in bangs. I found both on sale. :) The bangs were trimmed for me by Chibi. The color is actually really close to my regular hair color when you hold them next to each other, but the light gives the bangs a slightly redder look. I was still really happy with everything though, and even though I was recognized by very few (as a pretty minor character), it made me feel warm and fuzzy when people did realize who I was. :) I had lots of fun as the lovely Kaori. 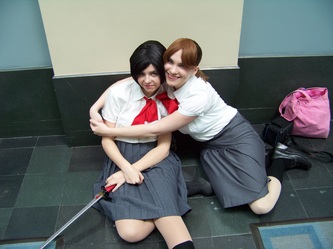 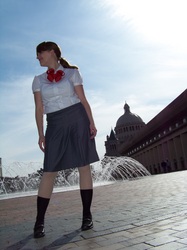 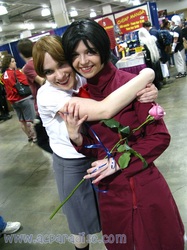